about Tempora and the US-Spy Program PRISM

The spying scandal disclosed by Edward Snowden around the global data surveillance programmes PRISM by the US and Tempora by the British secret service with its comprehensive spying not only of foreign states but especially of individuals needs to make us pose the question to which extent these spying programmes can pose a threat to us, the free expression of opinions or the democracy as a whole or whether we can simply trust these intelligence services. 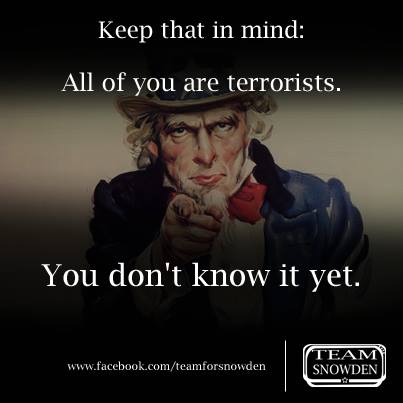 At the end of 2012 the newspaper d'Letzebuerger Land has published a conversation from 2007 of Jean-Claude Juncker with the former head of the intelligence service Marco Mille word-for-word; more than this an unlawfully eavesdropped conversation between Juncker and the grand duke Henri about the bomb planter affair has leaked out to the public. Jean-Claude Juncker who has a.o. successfully looked after the rescue of the Euro has to bear the main responsibility for the untroubled wreaking of his secret service SREL over years. Between 1984 and 1986 the intelligence service has committed more than 20 bomb attacks against the airport Findel, the law courts, against the police headquarter and a council meeting of the EU heads of governments with damage to property of millions of euros and several persons wounded. All of it just to lay the blame on eco-terrorists and left wingers. After respective clarification work tracks were leading to a secret army of the NATO and Stay-Behind a spy network of the NATO.

Now, as far as this we should not forget about the operation Gladio where the Italian secret service has blasted school busses with children and the railway station in Bolognia in cooperation with the CIA to lay the blame on the communists (At the time this article was written you could read about it on Wikipedia.). By bombing the US-ship liberty the Israelis wanted to spark off a retaliatory attack against Egypt. It should also be well known that the CIA has assaulted a terrorist attack against the Iran to blame the pro-western president Mussadegh and restore the long hated Shah into office.

Now how is all of that concerned with the spying affair? Just a lot. It tells us how the US-lead world confronts its political enimies. Operation Gladio may date back to the times of the cold war. Today the situation has become much more unclear and with it the concept of enimies which should not make us less alert. We should not only worry about the electronic eavesdropping affair against left-wing parties as it has coincidentially leaked out in Luxemburg. By PRISM and Tempora we as a private person get more and more into the focus of observation; allegedly in order to prevent terrorist attacks.

Over a million of people are already on the terror list of the USA. The list is unfair, out of control and totally bureaucratic. That way even the democratic senator Edward Kennedy and Nelson Mandela have got onto the list for some time. Once having been on the list the records will never be deleted even if someone has been opted out (stuttgarter-zeitung.de). Partially even children have got onto the list if their parents have once been suspicious. That way the 18 month old Riyanna had to leave the plane with her mother in Florida (www.shortnews.de). No court needs to verify evidence in order to put names and persons on the list; that opens the floodgate to potentially indiscriminately measures.

However the problem about the terror list is not only bounded to prohibit flying with airplanes. Prof. Armin Krishnan (deutsche-wirtschafts-nachrichten.de) reveals us that the list is also passed on to potential employers making it very hard for the concerned persons to find a job. Persons on the list can any time be executed or arrested. The legal process is excluded - even abroad. As a matter of principle the Obama government proclaims that terrorists even if they are American citizens can be assassinated worldwide. The president still needs to approve every assassination. Nonetheless FBI directory Müller did not want to answer with a clear Nay on the question whether assassinations can also take place in the USA. Foreign minister Hillary Clinton says that the US-government would attack terrorists worldwide as it thinks best.

Well; those who have nothing to hide don`t need to fear anything! Apparently there are still enough people who think like this. Otherwise the apathy of so many people also towards their polititions can not be explained. Those who think that they live a very ordinary live should at least think about the political dimensions of the spying scandal.

After the terrorist attacks of September 11th the FBI had set Greenpeace and the animal rights group PETA on the terror list. Some fellow campaigners of Greenpeace have even been put on the black terror list (diekritiker.com). It is also not completely beside the point that death of lady Diana is still a riddle. However it is sure that assassinations sanctioned by the state will increment especially but not only because of them being more and more simple to undertake. In the meantime it is possible to sham causes of death like heart attacks (deutsche-wirtschafts-nachrichten.de). Mostely it is fully sufficient to draw a person into public discredit like Attorney General Robert Biever in Luxembourg by invented pedophilia rumour. The accusations of Dominique Strauss Kahn against rape seem to be also pure invention although his severely turbulent private live is out of question. What reasons should someone who can pariticipate in sex parties every time he wants have to commit rape? Much more likely is that the accusations were put about because Dominique Strauss Kahn has tried to improve the conditions imposed by the IMF (International Monetary Fund) for debtor nations after a.o. Greece and Portugal have been subducated to IMF payment conditions. Improvements for debtor nations would have siginficantely caused harm to the way the USA used debts of foreign states to gain power over them (Those of you who think that may sound strange should be recommended to read one of John Perkins books as disclosed on my main page; just think about the countries in South America f.i.).

Has the international alarm about the spying scandal and the global data surveillance programmes of NSA and GCHQ by the USA and GB made this nations to turn in in any kind of way; at least what concerns our private data? Not at all. It is not long ago that the provider of the encrypted email service Ladar Levison, the service being called lavasoft.com, had to close down; a service also used by Edward Snowden. 'It is just the case, that in this special case, as I have thought, that law-abiding ...'. Those who receive a national security letter and who will talk about it will be imprisoned for five years. NSA-letters are about handing over customer data to the initlligence agency. The founders complained to become accomplices of a crime and had to turn their back on ten years of hard work. The pressurization of the newspaper „The Guardian“ is just the youngest outgrowth of the anti-anti-anti-terror combat.

Read more about our own experiences with elstel.org and 'proactive spying'!

By all attempts to show equanimity, I take the liberty of expressing my indignation in the case of Edward Snowden. Finally a man breaks his silence, who has a deep insight into the system of global manipulation by those forces that have ruled us for decades, who use wars and terror as an excuse to monitor all people for security reasons.

Snowden has risked everything, his belongings, his income, his life and that of his loved ones. I am outraged that he is compared to traitors who have committed espionage and treason for payment. It is shocking that no Western politician or people´s representative dares to grant him asylum and instead buckle in front of the supposed friends who have made us dance like puppets for decades.

Where is a politician in our free western world, to whom freedom and honesty still mean something? I am ashamed of all European representatives who put this man's life at risk by hiding behind legal texts and thus miss the chance to finally shed light on the machinations of this world. The drama of the system shows that almost all governments are suddenly in agreement.

I close with Karl Jaspers: Seeing truth is human dignity. Truth alone makes us free, and only freedom makes us unconditionally ready for truth. Where has our freedom gone?